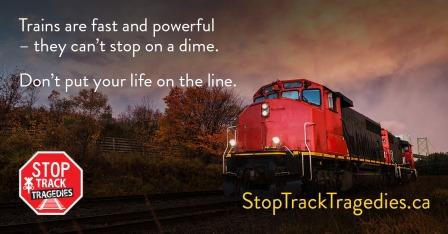 September 21-27, 2020, is Rail Safety Week, which is top of mind in Manitoba. September and August have seen five Manitobans die and one sustain life-threatening injuries after collisions with trains. Crossing railroad tracks is mostly unavoidable in rural Manitoba, so it is important to be aware of the warning signs. Railroad tracks are marked, and some have crossing arms that alert people on the roadway that a train is approaching. When a train is coming, vehicles should stop at least four and a half metres away from the rails and wait until the train is completely clear before proceeding.

"When it comes to a train versus a car, the train will win every time," said Staff Sergeant Kyle McFadyen of Manitoba RCMP Traffic Services. "Anyone approaching train tracks needs to pay extra attention to whether or not a train is approaching. Those few seconds could save your life."

Operation Clear Track, a partnership between Amtrak, Operation Lifesaver Inc., and Operation Lifesaver Canada, aims to reduce the number of railway incidents in Canada and the United States. Their statistics show that a motorist is 40 times more likely to die in a train-vehicle collision than in a crash with another motor vehicle. It takes the average freight train travelling at 90 kilometers per hour the length of 18 football fields to stop, so the train is unable to stop in time to avoid a collision. Crossing the tracks when there is an oncoming train is a deadly mistake.

"A split-second decision to try to beat a train at a crossing, or to use tracks as a shortcut or recreational path, can have tragic consequences," said Sarah Mayes, National Director of Operation Lifesaver Canada. "Operation Clear Track's goal is to encourage people to think twice before engaging in unsafe behaviours, and to learn how to keep themselves safe around tracks and trains."