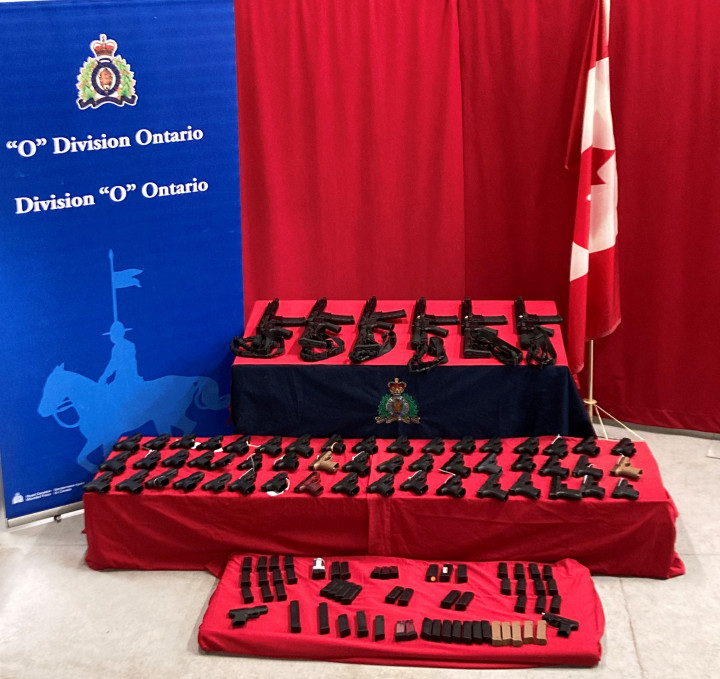 On Friday November 26, 2021, members of the Integrated RCMP Cornwall Border Integrity Team commenced a firearms smuggling investigation after a boat crossed the St. Lawrence River and made landfall near Cornwall, ON. Three large bags were unloaded from the boat into a vehicle which departed the area. Subsequently, RCMP conducted a roadside stop of the vehicle and found a large number of restricted and prohibited firearms and high capacity magazines. As a result, Inti Falero-Delgado, 25 years old, from Laval, QC, and Vladimir Souffrant, 49 years old, from Montreal, QC, were placed under arrest.

The investigation found a total number of 53 restricted and prohibited pistols, 6 prohibited rifles, and 110 high capacity magazines. As is the case with the vast majority of unlawful guns, it is believed these firearms were destined for criminal networks and illicit gun trafficking groups.

"I would like to thank our partners from the Ontario Provincial Police (OPP) and Akwesasne Mohawk Police Service (AMPS) for their assistance in this case as well as Montreal Police, Sûreté du Québec, RCMP C Division Valleyfield Detachment and the National Weapons Enforcement Support Team (NWEST) for their support with the ongoing investigation."

Anyone with information about cross-border criminality is asked to contact the RCMP Cornwall Detachment at 613-937-2800. If you wish to make an anonymous report, please contact Crime Stoppers at 1-800-222-TIPS (8477) or visit the Crime Stoppers website.