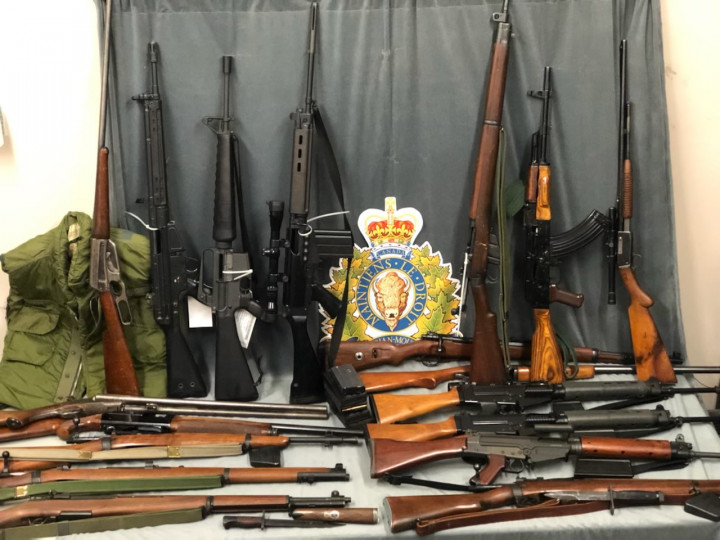 At approximately 5 a.m. on Nov. 30, 2021, Innisfail RCMP observed a subject known to police to violate his court-imposed conditions by leaving his residence in Penhold, Alta. and depart in a vehicle.

With the assistance of Blackfalds RCMP, a traffic stop was conducted on Highway 2A leaving Penhold. Three occupants in the vehicle were located in possession of two firearms. The vehicle and firearms were seized and the occupants, two males and one female, were arrested.

Search warrants were obtained and executed by Innisfail RCMP at the residence in Penhold as well as on the seized vehicle with the assistance from the Southern Alberta Crime Reduction Unit (SACRU), Forensic Identification Section (FIS), and the National Weapons Enforcement Support Team (NWEST) along with Blackfalds and Innisfail ITU

A total of 21 prohibited and non-restricted firearms were seized, along with silver coins, collectable currency and suspected methamphetamine and drug paraphernalia.

A 21-year-old male from Penhold, Alta., a 33-year-old male of no fixed address, and a 37-year-old female from Olds, Alta., have been jointly charged with numerous offences:

The 21-year-old male and the 37-year-old female have been jointly charged with the following:

The 21-year-old male has also been charged with the following:

The 37-year-old female has also been charged with the following:

Innisfail RCMP General Investigative Section believe the firearms seized are related to a recent Break and Enter in Innisfail and are continuing to investigate.

Innisfail RCMP are encouraging the community to report criminal or suspicious activity when it is observed as too often incidents are reported long after the incident. Reports tell us where to look, who to look for, and where to patrol in the future. If you see a crime in progress, dial 911. If you wish to remain anonymous, contact Crime Stoppers at 1-800-222-8477 (TIPS), online at www.P3Tips.com or by using the "P3 Tips" app available through the Apple App or Google Play Store.