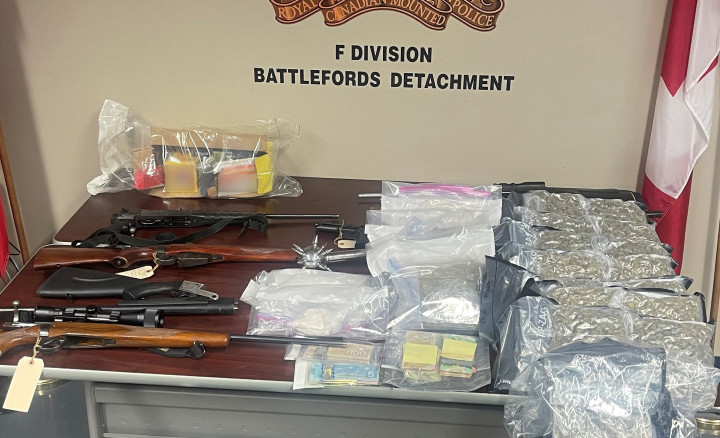 As a result of these search warrants, officers located and seized:

Four adult males were arrested during the execution of these search warrants. All are from the North Battleford Detachment area.

Russell Ens, Matthew Kennedy and Benjamin Lennie have been charged with:

Trevor Kennedy is charged with:

In addition to the above, Chris Phillip of North Battleford, Saskatchewan has been charged with:

A warrant has been issued for his arrest and officers are actively trying to locate and arrest him. Chris Phillip is described as approximately 5'10" and 180 lb. He is balding and has a white beard. We do not have a photo of him. Anyone with information on his whereabouts is asked to call their local RCMP detachment by calling 310-RCMP. Information can also be reported anonymously to Crime Stoppers at 1-800-222-TIPS (8477) or www.saskcrimestoppers.com.

The seizure of the drugs and weapons and associated arrests is the culmination of a six-month-long investigation by the North Battleford RCMP's Gang Task Force and the Saskatchewan RCMP's Crime Reduction Team (CRT) and Warrant Enforcement and Suppression Team (WEST).

"This was a proactive, in-depth investigation. Because of the meticulous work of our police officers, a very significant amount of weapons and drugs have been removed from the street," says S/Sgt. Jason Teniuk, acting commander of the North Battleford RCMP. "We will not tolerate the trafficking of guns and drugs in our community and will continue to proactively investigate and charge those who do so. This is another example of the results of the tireless work our Gang Task Force officers, who work in our detachment area, do everyday to keep our communities safe."

"As the province's police force, the Saskatchewan RCMP has the many specialized resources required to complete an investigation of this magnitude – and to dismantle significant criminal operations like this one," says Insp. Glenn Church from Saskatchewan RCMP's Criminal Operations. "The efforts of units like our Gang Task Force, CRT and WEST supplement the great work our frontline police officers do everyday in keeping communities throughout Saskatchewan safe."

Items, including quantities of drugs and a number of firearms, were located and seized. We appreciate the public's interest in this investigation and more information/specific details will be released early next week.