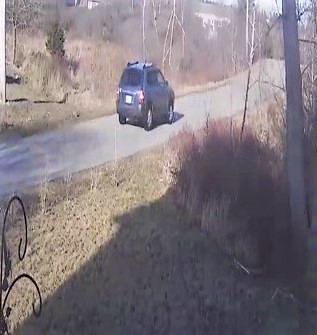 Yarmouth Rural RCMP is investigating a home invasion, where firearms were stolen, at a home on Martin Rd. in Upper Wedgeport.

On March 8 at approximately 6:15 p.m., two men entered a home on Martin Rd. in Upper Wedgeport. Both men were wearing masks, one of them was armed with a knife and the other with a metal rod. The men demanded that the firearms in the home be given to them, or they would harm the homeowner if he didn't comply. The victim gave the men three pellet guns, four rifles, ammunition and their cellular phone. The men then fled the scene in a grey hatchback. The victim was not injured during this incident and was the only one home at the time.

The men are described as white, between 20 and 30 years old, one man is tall and thin, the other is approximately 5-foot-6 with a beard.

Investigators continue to gather information and evidence and are asking for the public's assistance in identifying the owners of the grey hatchback, which is believed to be an older model Hyundai.

Note to media: Attached are images of the grey hatchback captured on video surveillance.