The Senior Executive Committee (SEC) is the senior decision making forum established by the Commissioner for the development and approval of strategic, force-wide policies, pursuant to and consistent with the Commissioner's authority under section 5 of the RCMP Act.

The role of SEC is to develop, promote and communicate strategic priorities, strategic objectives, management strategies and performance management for the purpose of direction and accountability. 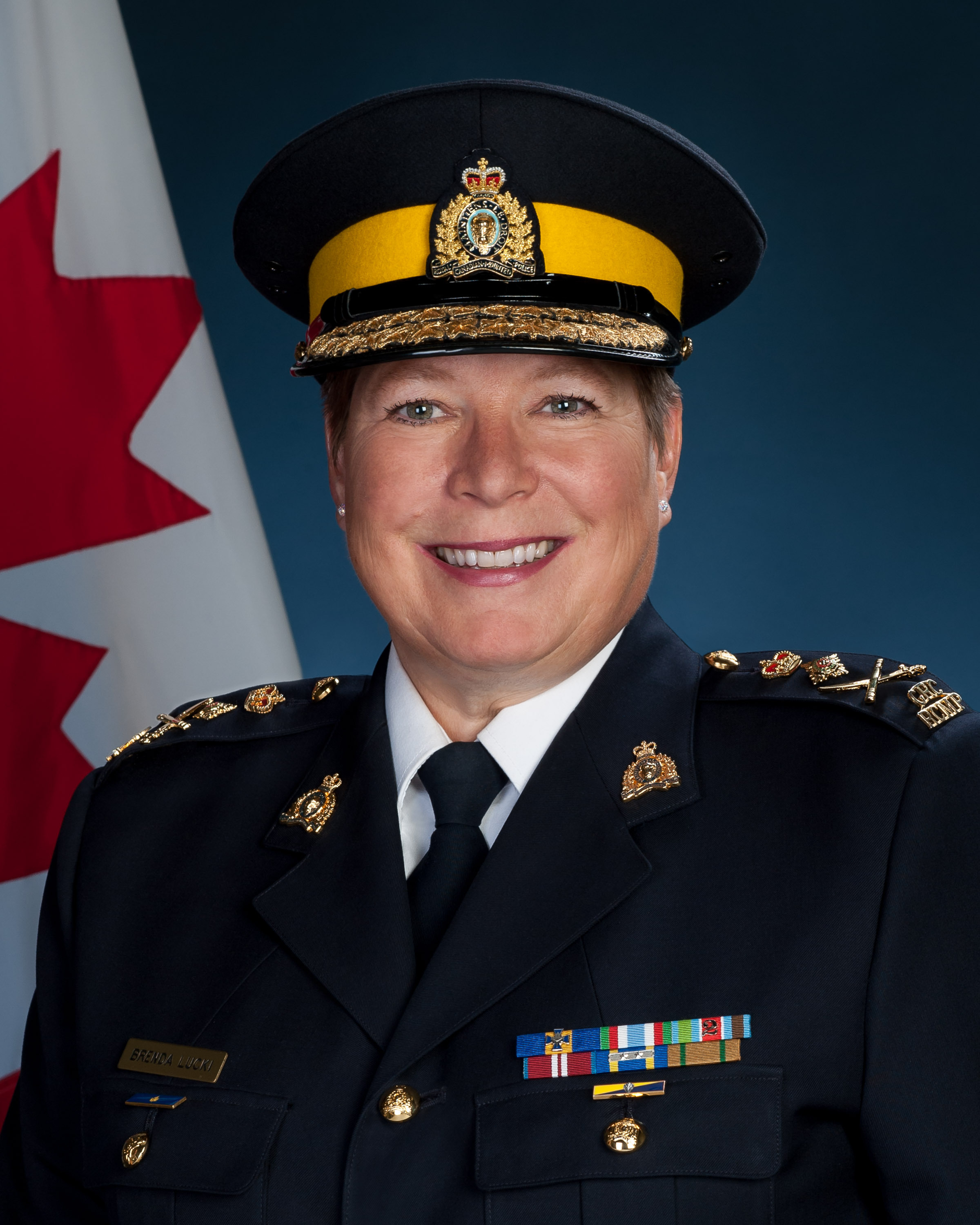 Commissioner Brenda Lucki, under the Royal Canadian Mounted Police Act, and direction of the Minister of Public Safety, has the control and management of the RCMP. This includes overseeing the delivery of front-line policing services in most provinces (except Ontario and Quebec) and all territories, law enforcement and investigative services to enforce federal laws, technology and support services to the broader policing community, and international policing duties.

Brenda Lucki was born in Edmonton, Alberta, and joined the RCMP in 1986. Throughout her career, she's served in Quebec, Ontario, Manitoba, Alberta, Saskatchewan, at the RCMP Academy (Depot Division), as well as internationally.

Her first posting was in Granby, Quebec, in federal policing. In 1993 and 1994, she served on a peacekeeping mission in the former Yugoslavia, overseeing investigations and monitoring aid delivery.

In 1995, she transferred to the RCMP's peacekeeping program in Ottawa. Following that role, she advanced through the non-commissioned officer ranks, first as an instructor at the RCMP Academy, then as an acting Detachment Commander in Manitoba.

In 2003, she was promoted to Inspector, working as the Traffic Services Officer for Saskatchewan, followed by the Community and Contract Policing and District Operations Officer.

In 2016, she was named Commanding Officer of the RCMP Academy, and on March 9, 2018, she was announced as the RCMP's 24th Commissioner.

Commissioner Lucki has a Bachelor of Arts in psychology and sociology from the University of Alberta. She is married and has two step-daughters and three grandchildren. 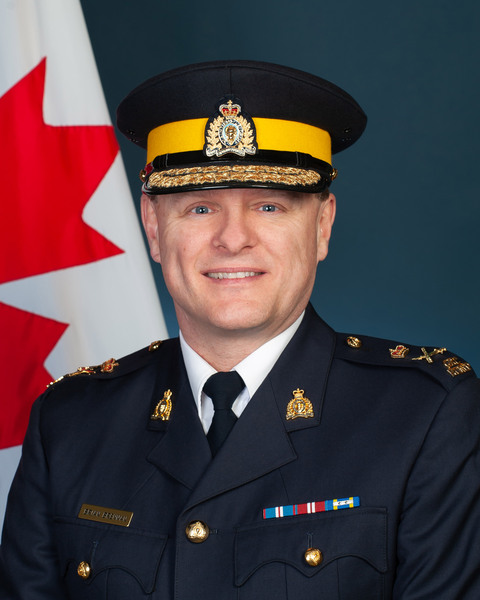 Deputy Commissioner Brian Brennan is responsible for Contract and Indigenous Policing, which includes overseeing delivery of local policing services in Canada's three territories and in all provinces except Ontario and Quebec. He and his team ensure a uniform level of service and consistent responses to operational issues that arise as a result of the RCMP's frontline policing responsibilities. They are frequently called upon to provide leadership to the broader public safety community to advance federal priorities, including providing culturally competent police services to more than 600 Indigenous communities.

After six years in Saskatoon's Integrated Drug Unit, he became an Inspector serving as Executive Officer to the Deputy Commissioner of Operations at National Headquarters in Ottawa. In 2004, Brian became the Officer in Charge of Drug Operations for Federal and International Operations, later serving as the acting Director of Drug Branch. In 2006, he transferred to Nova Scotia as the Federal Policing Officer and went on to become the Officer in Charge of Criminal Operations where he oversaw all contract and federal law enforcement operations for the province.

In 2014, Brian became the RCMP's Commanding Officer in Nova Scotia, a position that enabled him to help advance Indigenous culture. He introduced the RCMP's first Eagle Feather as an option for Indigenous people to use when swearing oaths, then established the RCMP's first permanent sweat lodge, offering Indigenous and non-Indigenous employees a space to attend ceremonies for spiritual cleansing, self-reflection and prayer. 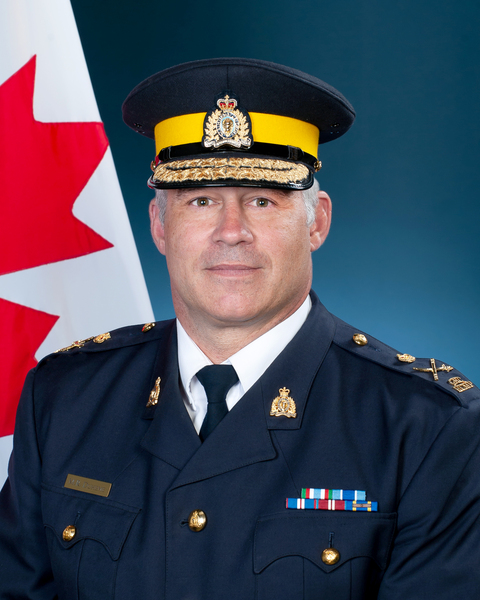 Deputy Commissioner Michael Duheme is responsible for Federal Policing, which includes overseeing the enforcement of federal laws, collection of criminal intelligence, assisting in the securing of Canada's borders, and ensuring the safety of major events, state officials, dignitaries, and foreign missions. Federal Policing is also charged with protecting Canada's institutions and national security by preserving public safety and the integrity of Canada's political and economic systems.

Deputy Commissioner Mike Duheme has been an RCMP officer for more than 34 years. Hailing from Chambly, Quebec, he began his career as a general duty investigator in New Minas, Nova Scotia and since then, has gone on to work in four different provinces in a variety of roles.

In addition to serving on a Kosovo peacekeeping mission, Mike has been a member of the RCMP's Emergency Response Team, a VIP personal protection officer, Operations Commander for the Francophone Summit and Director of the Parliamentary Protective Service. From 2016 to 2019, he served as the Commanding Officer of National Division in Ottawa.

Mike is leading the effort to modernize Federal Policing, one of the RCMP's core lines of service across Canada and around the world. He strives to empower RCMP officers to create value for the communities the RCMP serves, both domestically and abroad. He feels the increasing complexity of crime can be effectively countered by improving the organization's ability to respond to threats in collaboration with its domestic and foreign partners.

Bryan joins the RCMP from the Waterloo Regional Police Service (WRPS) where he served as Chief since 2014.

Bryan's extensive police leadership experience includes serving as Chief of the Guelph Police Service, as Director at the International Association of Chiefs of Police and, most recently, as President of the Canadian Association of Chiefs of Police. In his previous roles, he's accessed and relied on SPS services and gathered feedback from police agencies across Canada.

Bryan began his policing career in 1991 as a member of the WRPS, working as a front-line Constable assigned to Division #1 in Kitchener. Over the course of his career, he's held a number of progressively responsible positions including: Community and Media Relations; Special Assignments; Traffic Services; Human Resources, Recruiting; Media Officer; Executive Officer to the Chief of Police; and Superintendent of Central Division. 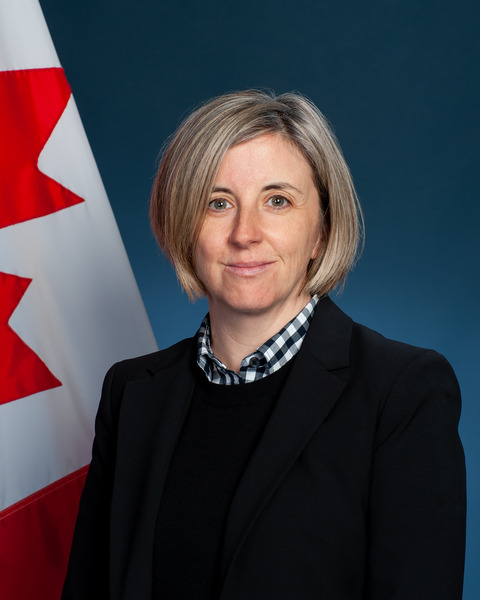 Chief Strategic Policy and External Relations Officer Alison Whelan has a broad range of responsibilities including: strategic policy; executive governance; external partnership and engagement; national communication services; planning and priorities; access to information and privacy; and public affairs. In addition, her sector leads Vision 150 & Beyond initiatives and identifies and supports a range of projects to help modernize the RCMP by using a diverse lens to challenge assumptions, build inclusivity and make evidence-based decisions. It also provides strategic and administrative support to the Management Advisory Board for the RCMP.

Alison began her professional career at the Public Policy Forum, later joining the federal public service with her first position at the National Secretariat on Homelessness. A proud Newfoundlander, Alison holds a Master of Arts degree in Political Science from Memorial University of Newfoundland, and completed the Harvard Kennedy School's Senior Executives in National and International Security program.

Originally from Northern Ontario and now based in Ottawa, Jen brings a wealth of public and private sector experience to the RCMP. In 2018, she was appointed Assistant Deputy Minister and Chief Financial Officer of Fisheries and Oceans Canada. She was responsible for overseeing the department's budget and for providing strategic advice to the Minister, ensuring that all plans and business decisions were based on sound financial analysis. Before that, she served as the Director General and Agency Comptroller for the Canada Border Services Agency. She managed $30 billion in annual revenue and oversaw the Agency's corporate accounting functions. She also held senior positions at the Canadian Institutes of Health Research and the City of Ottawa, where she led several transformation projects.

Before joining the federal public service, Jen spent eight years working in progressively senior roles for a global consulting firm. Jen began her career working for the Ottawa Police service where she held several roles. She holds a Master's in Business Administration from the University of Ottawa, with a specialization in Finance.

In May 2022, Nadine Huggins became the RCMP's Chief Human Resources Officer (CHRO), responsible for all matters related to the well-being, safety and compensation of RCMP employees. The CHRO's leadership is fundamental to many of the organization's ongoing modernization initiatives.

With several years of private sector experience and more than twenty years of accomplished public service, Nadine has built a career focussed on finding solutions to complex issues, leading teams and using a strength- based approach to promote change.

She began working for the RCMP in 2020, leading the development of our People Management Modernization. Under Nadine's direction, we created and are currently driving the People Strategy and the Vision 150 Equity Accountability and Trust action plan both of which are shifting mindsets and behaviours and preparing the RCMP to meet its future mandate.

Nadine works to build a healthy, respectful, diverse and inclusive workplace. She led the development and implementation of the RCMP's Equity, Diversity and Inclusion Strategy and is now leading Recruitment Renewal to ensure our candidates have the skills, characteristics and attributes needed to meet current and future policing needs. In January 2021, she became the RCMP's first Senior Designated Official for Diversity and Inclusion, collaborating with employees who are members of diverse communities.

The CHRO is responsible for all matters related to people management policy, the well-being, safety and compensation of RCMP employees. 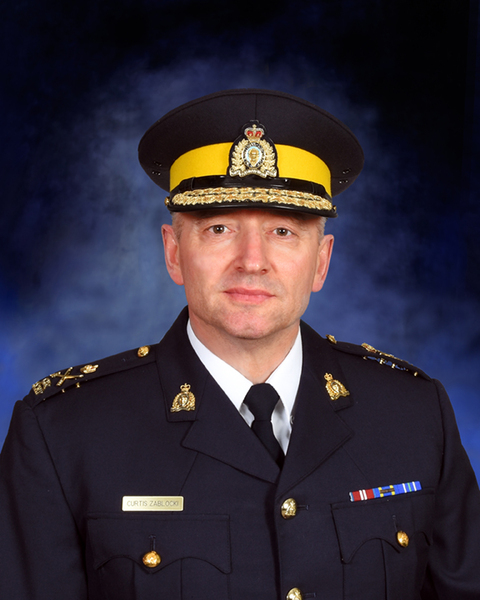 Deputy Commissioner Curtis Zablocki, a 31-year veteran of the RCMP, was born and raised in rural Saskatchewan. In September of 2018, he was appointed the 25th Commanding Officer of the Alberta RCMP (K Division).

Curtis knew Alberta well before becoming its Commanding Officer, having spent most of his RCMP career in the province performing operational duties including district advisory and detachment command functions, and serving as the Deputy Criminal Operations Officer. He then moved to Saskatchewan where he served as Commanding Officer for two years.

When he accepted his current role, Curtis set three divisional priorities to focus and guide K Division RCMP employees: our people, our community and our service. With a strong, healthy workforce and strong relationships with the communities it serves, K Division continues to build a foundation that helps it be responsive and flexible while keeping Alberta safe.

Curtis holds a Bachelor's degree in Criminology from the University of Alberta and is a Member of the Order of Merit of Police Forces. 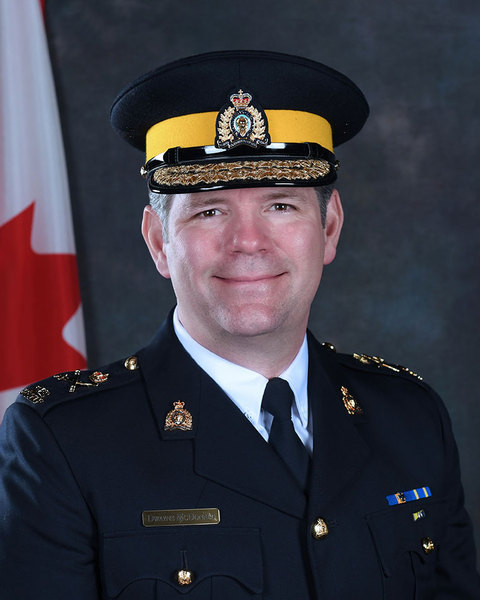 Deputy Commissioner Dwayne McDonald has over 29 years of experience in law enforcement having served both the Canada Border Services Agency (CBSA) and the RCMP. D/Commr. McDonald has a vast knowledge of federal, provincial and municipal policing with experience in positions of leadership and command in a number of high profile RCMP positions in British Columbia.

Most recently, Dwayne served as the Assistant Commissioner and Criminal Operations Officer for Federal, Investigative Services and Organized Crime for the province of British Columbia. He had oversight of a large portfolio of including RCMP Major Crime, Police Support Services, Criminal Intelligence, Federal Policing, National Security, and the Combined Forces Special Enforcement Unit-BC (CFSEU-BC).

Dwayne holds a Bachelor in Business Administration from Simon Fraser University. He lectures at the Canadian Police College in Major Case Management, Major Crime and Kidnapping investigations. He belongs to the Canadian Association of Chiefs of Police, and is a member of a number of significant law enforcement and intelligence-related committees.

In 2015, Dwayne was invested as a Member of the Order of Merit of Police Forces by The Governor General of Canada, His Excellency the Right Honorable David Johnston.