The changing fabric of the force

At Depot, cadets are pushed to their physical limits. Credit: Chrystal Normand, RCMP

On their fifth day at Depot, the RCMP's training academy in Regina, Sask., Cpl. Paul Cutler stands in the back of a classroom and addresses the 31 individuals in Troop 1.

Cutler, one of their two troop facilitators, asks the new cadets to look down at their uniform shirts. It's the first day they've been allowed to don their uniforms and they've been carefully adjusting themselves and one another all morning.

He asks them to consider why their shirts are grey, of all colours, when many other police agencies use blue, black or white. He then suggests that a quick glance downwards can serve as a helpful reminder throughout their careers of what police work is really about.

"Policing doesn't always have black and white answers. Policing has grey areas," says Cutler. "When you or someone else want a black and white solution, look down at your shirts and remember that."

Canada has changed a great deal since the North West Mounted Police was established in 1873. Issues of gender, sexual orientation, cultural and religious differences require more than a just-the-facts-ma'am approach.

And as the RCMP continues to adapt and change to reflect Canadian society, the force is drawing on the unique experiences and qualities of its individuals to strengthen the RCMP as a whole. The faces behind the uniform have increasingly become less uniform.

Cadet Vanessa Lee is a 29-year-old recruit from Surrey, B.C. Before joining the RCMP, she worked in social services with youth, refugees, recent immigrants and homeless women.

"I've always thought of myself as doing something for the community," says Lee. "I want to build upon what I learned during my years in social service and apply it to making our country a better place."

It's the same for Cadet Kurt Butler. Butler, 35, whose father is a retired member of the force, says his father certainly influenced his choice and gave him an understanding of what the job involves — Butler attended nine different schools between primary and high school — but he says the main reason he joined was because it was the right choice for him.

"I really feel like I'm meant to be someone who helps people," says Butler. "When everybody else has run out of the building, it's the police officers who are running into the building. I want to be the guy people call when they actually need help."

You'd be hard pressed to walk the grounds at Depot and find a cadet who doesn't say their ultimate goal is to help people. And while that's definitely not a new thing, the force's understanding of how police help their communities has shifted over time.

As she explains the principles of community policing to Troop 1, Cpl. Kate Bamber, their other facilitator, emphasizes the need for flexibility in their chosen field.

"When things change, we need to change to meet those demands," says Bamber.

Bamber says that concept is central in all the lessons cadets learn throughout their six months of intense training. As the facilitators tell them, policing is a dynamic field and police officers need to anticipate that at any given moment, things could change.

"We need to always think about what we're doing well, what needs work and how to improve," says Bamber. "If we're not assessing, we're not growing and we're not learning." 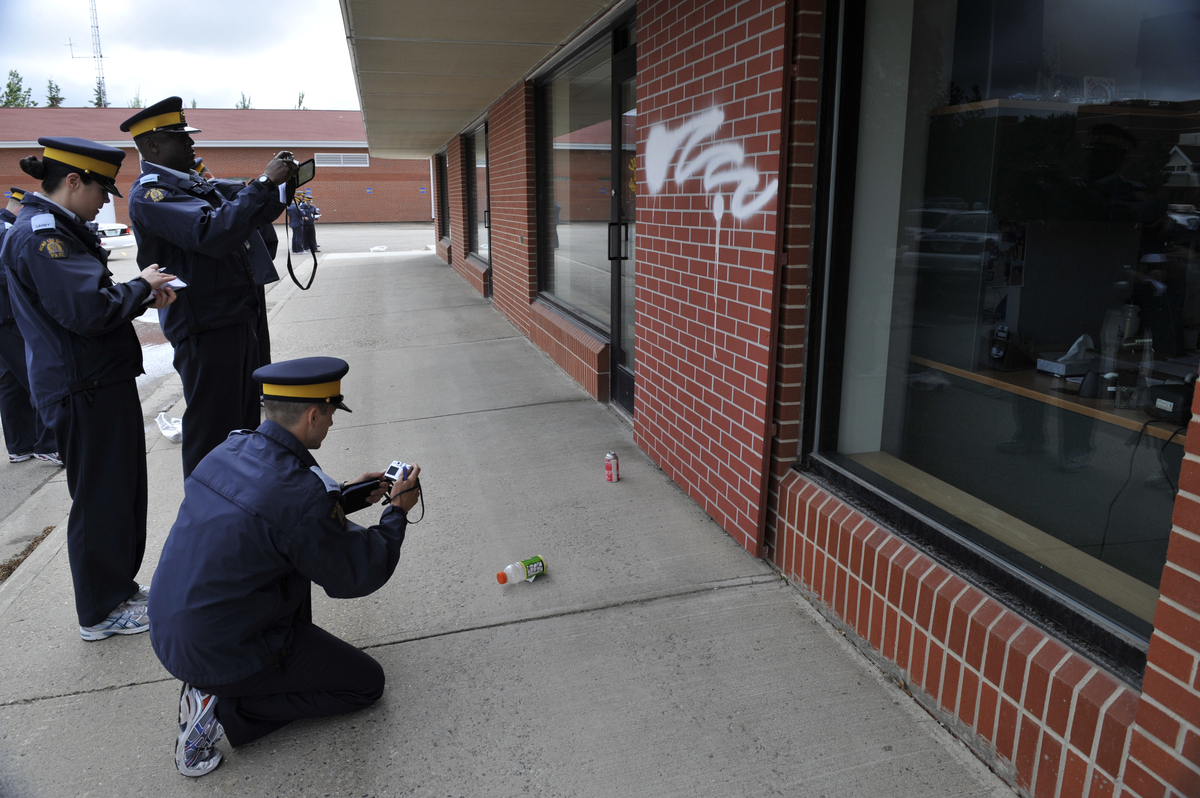 Cpl. Natasha Szpakowski is the non-commissioned officer in charge of proactive recruiting in Saskatchewan.

Szpakowski, who previously worked at the academy, says one of the most important aspects of the job of a recruiter is to simply ask people whether they've ever considered being a police officer — and she's found a lot of people haven't.

"I always find it interesting because people will say, 'I'm too old' or 'I'm not in good enough shape'," says Szpakowski. "But in my experience, a regular member reflects any other person that's walking down the street. I've seen people as young as 19 and as old as 62, people of all shapes and sizes come and be successful."

Cadet Michael Roberts, 23, had wanted to be a police officer since he was very young. But as he hit high school and realized he wasn't going to be very tall or muscular in stature, guidance counsellors advised him against pursuing policing.

After a series of uninspiring forays into the trades, Roberts decided he wanted to do something different. He was going through the application process for the Canadian Forces when he ended up stumbling across the RCMP site.

"I had never really considered it as a career option," says Roberts. "Right off the bat, I pictured a lot of really manly men who were really into weight lifting and really competitive."

But what Roberts has found in his troop is a group of people that within just two weeks, he already feels are more than just classmates.

On the first day of week one, Troop 1 ran their first PARE (Physical Abilities Requirement Evaluation), a timed test that pushes them to their physical limits. They went one at a time while their troopmates watched from the sidelines. Cheering when they did well and encouraging each other when they struggled, everyone completed the evaluation successfully under the time limit.

Cadets learn quickly that they're stronger as a whole rather than in parts — a lesson facilitators hope they apply throughout their careers, building partnerships with their coworkers and clients alike.

Beyond establishing good habits, working together is a necessity for the cadets. Depot is a gruelling test of a person's mental and physical limits. Supt. Suk Pal, the training officer, says it's a place members come to associate with both their greatest challenges as well as their greatest triumphs.

Cpl. Curtis Davis, a firearms instructor, says that those daily pressures are compounded by the fact that the process often takes years and that each cadet has put their whole life on hold to get there and at any minute, they could lose that entire personal investment.

To back up this statement, Davis turns to a group of cadets from Troop 20 lined up at the range, practising for their shotgun evaluation, and calls them out by name, asking them how long they waited just to get to Depot. The answers, ranging from 18 months to two and a half years, are average, he says.

"Those years waiting to get to Depot all could ride on 20 minutes of shooting," says Davis, referring to their firearms qualifications. "This is their whole career."

And it's not just their firearms skills that put them at risk of being sent home — everything cadets do from how they keep their pits organized to how they express themselves in class is being evaluated. But, Davis, his fellow instructors, and Pal all agree that the RCMP can't keep cadets on with the organization if there are doubts about their abilities.

"We cannot afford to knowingly, out of the goodness of our hearts or any kind of affection for an individual, send them into the field when they're not ready," says Pal. "We would not be doing the Canadian public, that individual, or the people they work with any favours."

Depot's goal is to create the best possible police officers. As A/Commr. Louise Lafrance, the commanding officer of Depot, puts it, when she hands a cadet their badge when they graduate, she's telling them that she's confident enough in their abilities to work with them side by side someday. 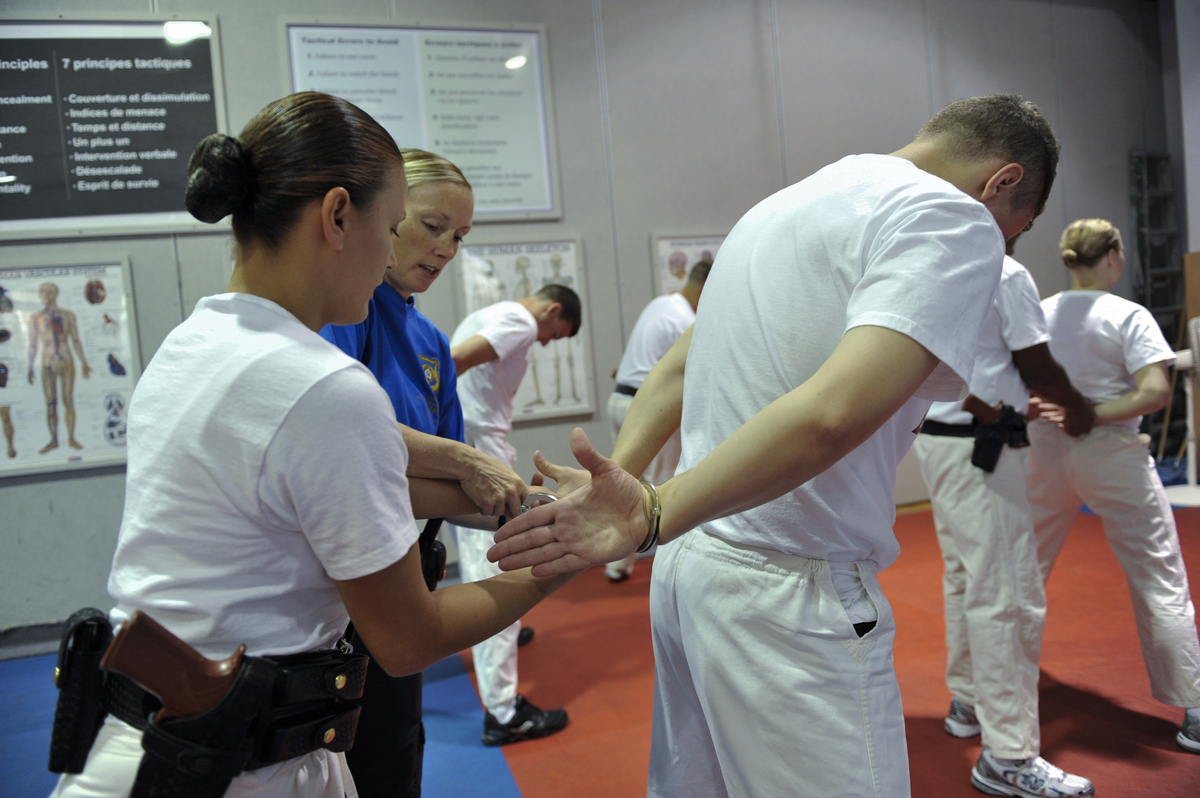 Changes to the program

In recent years, there's been a shift in the philosophy of how best to shape the learning environment. From the get-go, they're told that facilitators help cadets develop the skills to be excellent police officers, but that they won't be babied through the process. And because all the cadets are adults, they're treated as such.

"Our facilitators here gain their authority through respect, whereas I think, in previous times, that authority and that respect was demanded," says Pal.

Rather than having facilitators stand at the front of the class and read from a textbook, cadets are presented scenarios and encouraged to talk through situations and explain their rationale — for both their own benefit and that of their peers. The best facilitators, all members themselves, pepper their lessons with relevant experiences from their own time in the field.

Simulators are also starting to have more importance in fields like driving, firearms and judgment. With the simulators, cadets are able to learn and try out techniques in a safe environment without worrying about potentially damaging equipment or harming themselves or others.

Everything they learn in their 24-week program has a purpose, and builds upon lessons and theories they've been taught from day one. And while the intention is not to scare the cadets, there's no glossing over the ugly realities of policing.

On Troop 1's first day learning police defensive tactics, there's a quote written on the board to that effect: "Expect the best, prepare for the worst."

They're told that their best teacher is their last mistake, meaning they're supposed to make mistakes so they can learn from them. The philosophy in their fitness classes, which could apply to the rest of their education at Depot, is that what tires them now shouldn't in six weeks.

Cadet Rachel Williams, 44, originally from England, served for 13 years as a police officer there, before coming to Canada on a holiday and deciding to stay, with the intention of becoming a Mountie.

Six years later, Williams found herself in Regina. She's seen plenty of ugly things in her policing career, but she says balancing her work and personal life has saved her from becoming bitter or jaded.

"My life is amazing and when I see others who don't have amazing lives, it just makes me more inspired to help," says Williams. "But not everyone can do this job. I couldn't be a doctor — I can deal with trauma, but I can't deal with illness. We're all cut out to be something, it's just about finding that niche."

For Cadet Deborah Goble, 45, she'd always known her niche was police work. After her federal government office was closed in Kelowna, B.C., last year, she decided it was finally her chance to try to get into the RCMP.

As a young girl, Goble had spotted a female police officer and known immediately that was what she wanted to be. She's left a lot behind to come to Depot — Goble has two children, 10 and 11 and a husband at home — and although every day is a challenge, it has reconfirmed to her that she's exactly where she wants to be.

"I'm a big fan of the fact that life begins at the edge of your comfort zone," says Goble. "Even when I'm exhausted, even when I'm like, 'Are you kidding? They've given me more homework?', I'm just so happy to be here. I haven't doubted my decision at all."

Depot continually strives to set itself apart as a leader in police training techniques and high standards. Lafrance says there's a difference between training a police officer and creating a Mountie. One of those key differences is that they strive to encourage both a sense of pride in the organization's history and a drive to help bring it into the future.

And in the 29 years since she graduated herself, she hasn't lost her reverence for what the shaping of recruits means for everyone — not just the cadets themselves.

"The cadets are why we're all here," says Lafrance. "You really feel like you've accomplished something when you help create a Mountie."